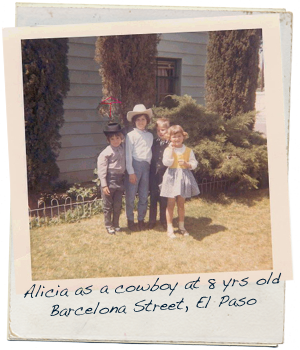 Alicia Gaspar de Alba is a native of the El Paso/Juárez border and grew up on Barcelona Street, less than a mile from the Segundo Barrio. She attended Loretto Academy Elementary School, Eastwood High School, and la UTEP.

After graduating with her Master's degree, she moved to San Miguel de Allende for six months to live "the writer's life," but she learned to make paper and weave small rugs instead.

In 1985, she moved to Iowa City to begin her doctorate in American Studies, where she enjoyed the snow and the Black Angel Cemetery and her community of queer Latinas/os, but not academia. She moved to Boston, Massachusetts to work in publishing and found a full-time job as a braille transcriber at National Braille Press, and also taught English Composition and ESL courses at UMASS Boston part-time. Investing $600 on a used IBM Selectric typewriter, she resolved to "be a writer" no matter what, and sat at her typewriter every morning for 4 years.

In 1990 she moved to Albuquerque, New Mexico, to finish her Ph.D. in American Studies at UNM, and since 1992, she has been living in Los Angeles. In 1994, a few months after filing her dissertation, she landed a tenure-track job teaching Chicana/o Studies at UCLA.

She makes her home in Los Angeles' Mid-City with her wife, digital artist and muralist Alma Lopez, their two kitties: Rubi Tuesday and Luna Azul, and their two dogs, Penelope and Lucy. 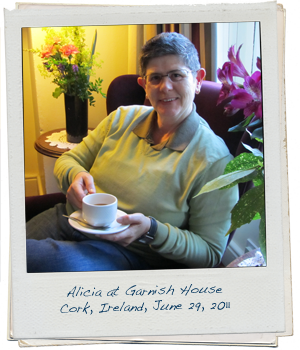 Alicia's books have won several writing awards. In 2005, Desert Blood: The Juárez Murders won the Lamda Literary Foundation Award for Best Lesbian Novel and the Latino Book Award for Best English-Language Mystery. Sor Juana's Second Dream was awarded the Latino Literary Hall of Fame Award for Best Historical Novel in 2001. And in 1994, she received the Rudolfo and Patricia Anaya "Premio Aztlán" for The Mystery of Survival and Other Stories. Alicia received a Massachusetts Artists Foundation Fellowship Award in poetry in 1989.

Alicia's poetry and fiction have been anthologized in numerous publications, and her novels have been translated into Spanish, German, and Italian. Check out the full list of Alicia's other publications. 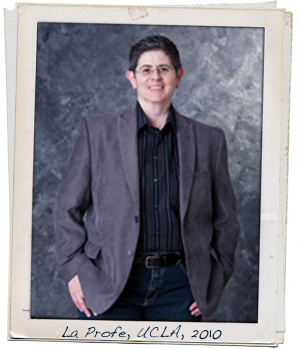 Alicia holds a Bachelor's degree in English (1980) and a Master's degree (1983) in English-Creative Writing from the University of Texas at El Paso, and Ph.D. in American Studies from the University of New Mexico (1994). She was hired at UCLA in 1994, as a newly-minted Ph.D. and founding faculty member of the César E. Chávez Department of Chicana and Chicano Studies. Alicia received early tenure in 1999, and in 2005 was promoted to the rank of Full Professor. She served asdepartment Chair from 2007-2010, and holds joint appointments in English and Women's Studies.

La Profe, or "Gaspar," as her students call her, offers courses in Chicano/a cultural studies, the U.S./Mexico border, Chicana lesbian literature, barrio popular culture, Chicana feminisms, and bilingual creative writing. She is a longstanding member of the Lesbian, Gay, Bisexual, and Transgender Studies Faculty Advisory Committee. In 2000-01, she served as Interim Director of the LGBT Studies Program, and from 2002-2004, she was appointed Associate Director of the UCLA Chicano Studies Research Center.

In 1992 Alicia received a Chicana Dissertation Fellowship from the University of California, Santa Barbara; in 1993 she was awarded a Ford Foundation Dissertation Fellowship from the National Research Council; and in 1994, she received a Minority-Scholar-in-Residence postdoctoral fellowship at Pomona College. Her dissertation, "Mi Casa [No] Es Su Casa: The Cultural Politics of the Chicano Art: Resistance and Affirmation Exhibition," was awarded the American Studies Association's Ralph Henry Gabriel Prize for Best Dissertation in American Studies in 1994. In Spring 1999 she was awarded a Rockefeller Fellowship for Latino/a Cultural Study at the Smithsonian and in the Fall of 1999, she held the prestigious Roderick Endowed Chair in English at her alma mater, the University of Texas at El Paso, where she was a Distinguished Visiting Professor for one semester. At UCLA she has been awarded the Shirley Collier Prize for Literature from the Department of English, and most recently, the 2008 Gold Shield Faculty Prize for Academic Excellence.

On February 12, 2010, as part of the César Chávez Department's quinceañera celebration, Alicia (with the help of two graduate students, Allison Wyper and Georgina Guzmán) organized an all-day Valentine's symposium, "Sex y Corazón: Queer and Feminist Theory at the Vanguard of the New Chicana/o Studies," that looked back over the last fifteen years of Chicana/o Studies and examined how Chicana/o queer and feminist scholars have changed the field, and how their scholarship and activism utilizes what Chela Sandoval calls "the hermeneutics of love," or rather, the methodology of love as a political strategy for social change. Read more about Sex y Corazón.

On Oct. 31-Nov. 2, 2003, Alicia organized "The Maquiladora Murders, Or, Who Is Killing the Women of Juárez?" a 3-day international conference co-sponsored by Amnesty International about the epidemic of femicides on the U.S.-Mexico border. In February 2001, she organized "Otro Corazón: A Gathering of Queer Chicana/o Artists," a Valentine tribute to the creative spirit of queer Chicana/o visual artists, performance artists, writers, and critics, featuring the work of Cherrie Moraga, David Zamora Casas, Gronk, Alma Lopez, Catriona Esquibel, Luz Calvo, Francisco Alarcón, Adelina Anthony, and several others. In Spring 1995, while a Visiting Scholar at Pomona College, Alicia organized the first of her "corazón"-themed symposia: "Puro Corazón," a symposium focusing on the heart-filled work of three Chicana artists from different regions: Yolanda M. López from California, Carmen Lomas Garza from Texas, and Delilah Montoya from New Mexico. 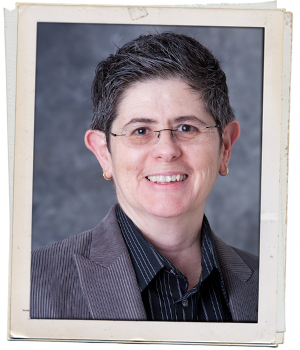 A native of the El Paso/Juárez border, Alicia Gaspar de Alba is a Chicana writer/scholar/activist who uses prose, poetry, and theory for social change. With a Ph.D. In American Studies from the University of New Mexico, Alicia is a Professor of Chicana/o Studies, English, and Women’s Studies at UCLA. She has published 10 books, among them, the award-winning novels, Sor Juana’s Second Dream (University of New Mexico Press, 1999), which was named Best Historical Fiction by the Latino Literary Hall of Fame in 2000, and Desert Blood: The Juárez Murders (Arte Publico Press, 2005), which received both the Lambda Literary Foundation Award for Best Lesbian Mystery in 2005 and the Latino Book Award for Best English-language Mystery in 2005. Her most recent historical novel, Calligraphy of the Witch, about a mestiza immigrant accused of witchcraft in the New England witch trials of 1692, was published by St. Martin's Press in 2007. Her two most recent anthologies are Making a Killing: Femicide, Free Trade, and La Frontera, a collection of scholarly essays that focus exclusively on the slaughtered women of the El Paso/Juárez border and the different grassroots movements that have arisen to denounce the crimes (2010, University of Texas Press), and Our Lady of Controversy: Alma Lopez’s “Irreverent Apparition,” co-edited with her wife Alma Lopez, a collection of feminist essays about a controversy that developed in Santa Fe, New Mexico in 2001 against Alma Lopez’s digital image, “Our Lady.” She has also published articles on Chicana aesthetics, Sor Juana Inés de la Cruz, la Malinche, border consciousness, and Chicano/a popular culture. All of her books are available on amazon.com.